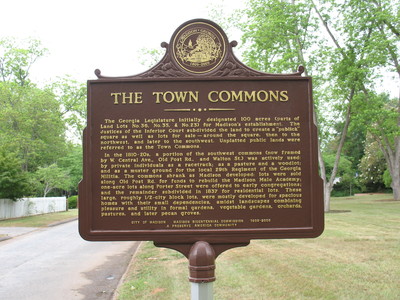 This marker is located at old Post Road, Madison in Morgan County, Georgia.

"The Georgia Legislature initially designated 100 acres (Parts of Land Lots No.36, No.35, & No.23) for Madison’s establishment. The Justices of the Inferior Court subdivided the land to create a “publick” square as well as lots for sale - around the square, then to the northwest, and later to the southwest. Unplatted public lands were referred to as the Town Commons.

In the 1810-20s, a portion of the southwest commons (now framed by W. Central Ave., Old Post Rd., and Walton St.) was actively used: by private individuals as a racetrack; as a pasture and a woodlot; and as a muster ground for the local 29th Regiment of the Georgia Militia. The commons shrank as Madison developed: lots were sold along Old Post Rd. for funds to rebuild the Madison Male Academy; one-acre lots along Porter Street were offered to early congregations; and the remainder subdivided in 1837 for residential lots. These large, roughly ½-city block lots, were mostly developed for spacious homes with their small dependencies, amidst landscapes combining pleasure and utility in formal gardens, vegetable gardens, orchards, pastures, and later pecan groves. "