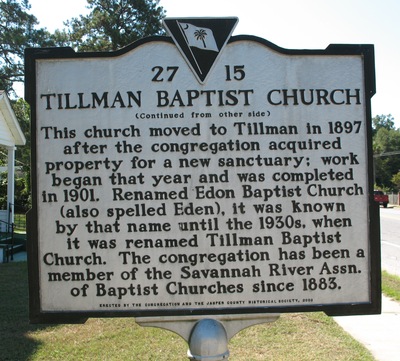 Continued from front.... " This church moved to Tillman in 1897 after the congregation acquired property for a new sanctuary; work began that year and was completed in 1901. Renamed Edon Baptist Church (also spelled Eden), it was known by that name until the 1930s, when it was renamed Tillman Baptist Church. The congregation has been a member of the Savannah River Assn. of Baptist Churches since 1883."

Erected by the Congregation and the Jasper County Historical Society, 2000