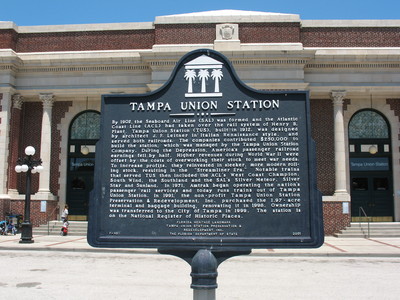 Tampa Union Station (TUS) is a historic depot in Tampa, Florida, United States. It was designed by Joseph F. Leitner and opened on May 15, 1912, by the Tampa Union Station Company. In 1974, as Union Railroad Station, it was added to the U.S. National Register of Historic Places and in 1988 it received local landmark status from the City of Tampa.

The text on the marker reads as : " By 1902, the Seaboard Air Line [SAL] was formed and the Atlantic Coast Line [ACL] had taken over the rail system of Henry B. Plant. Tampa Union Station (TUS), built in 1912, was designed by architect J.F. Leitner in Italian Renaissance style, and served both railroads. The companies contributed $250,000 to build the station, which was managed by the Tampa Union Station Company. During the Depression, Americas passenger railroad earnings fell by half. Higher revenues during World War II were offset by the costs of overworking their stock to meet war needs. To increase profits, they reinvested in sleeker, more modern rolling stock, resulting in the Streamliner Era. Notable trains that served TUS then included the ACLs West Coast Champion, South Wind, the Southland and the SALs Silver Meteor, Silver Star and Sunland. In 1971, Amtrak began operating the nations passenger rail services and today runs trains out of Tampa Union Station. In 1991, the non-profit Tampa Union Station Preservation & Redevelopment, Inc. purchased the 1.97-acre terminal and baggage building, renovating in it 1998. Ownership was transferred to the City of Tampa in 1999. The station is on the National Register of Historic Places."