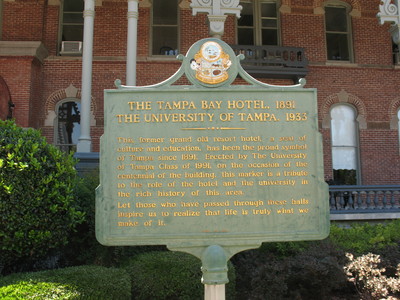 The text on the marker read as :

" Henry B. Plant built this ornate Moorish structure at a cost of $3 million. Opened in 1891, it became the social and cultural center of early Tampa. During the Spanish American War it was headquarters for troops going to Cuba and house such visitors as Col. Theodore Roosevelt, Clara Barton, Richard Harding Davis and Gen. Nelson Miles. Purchased by the City of Tampa in 1905, it has served as the main building of the University of Tampa since 1933." Florida Board of Parks and Historic Memorials 1961.

Sponsored or placed by: Florida Board of Parks and Historic Memorials .