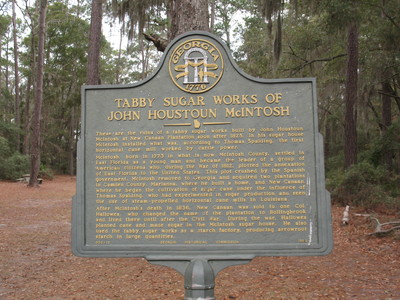 This historical sign sits off Highway 40 - Spur near Kingsland, Ga. This park is not far from the Kings Bay Submarine Base. On the property sits the ruins of a tabby sugar mill of long ago.

" These are the ruins of a tabby sugar works built by John Houston McIntosh at New Canaan Plantation soon after 1825. In his sugar house McIntosh installed what was, according to Thomas Spalding, the first horizontal cane mill worked by cattle power.

McIntosh, born in 1773 in what is now McIntosh County , settled in East Florida as a young man and became a leader of a group of American citizens who, during the War of 1812, plotted the annexation of East Florida to the United States. This plot crushed by the Spanish government, McIntosh removed to Georgia and acquired two plantations in Camden County, Marian, where he built a home, and New Canaan, where he began the cultivation of sugar cane under the influence of Thomas Spalding, who had experimented in sugar production and seen the use of steam-propelled horizontal cane mills in Louisiana.

After McIntosh's death in 1836, New Canaan was sold to one Col. Hallowes, who changed the name of the plantation to Bollingbrook and lived there until after the Civil War. During the war, Hallowes planted cane and made sugar in the McIntosh sugar house. He also used the tabby sugar works as a starch factory, producing arrowroot starch in large quantities."