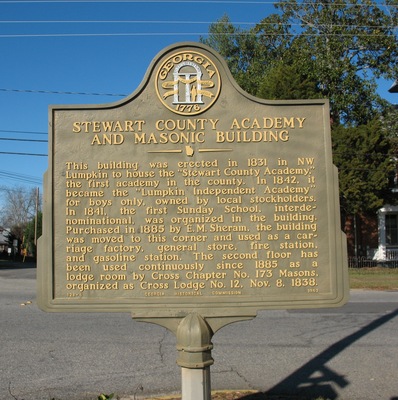 It is located opposite the courthouse in Lumpkin, Stewart County ,GA.

The text reads as:

" This building was erected in 1831 in NW Lumpkin to house the `Stewart County Academy,` the first academy in the county. In 1842, it became the `Lumpkin Independent Academy` for boys only, owned by local stockholders. In 1841, the first Sunday School, interdenominational, was organized in the building. Purchased in 1885 by E.M. Sheram, the building was moved to this corner and used as a carriage factory, general store, fire station, and gasoline station. The second floor has been used continuously since 1885 as a lodge room by Cross Chapter No. 173 Masons, organized as Cross Lodge No. 12, Nov. 8, 1838."