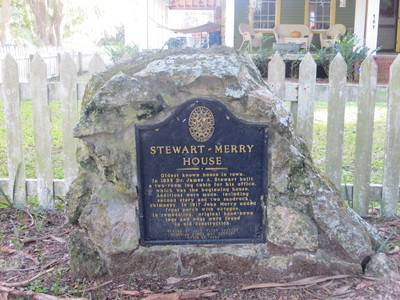 This marker is located In front of a rambling house in Micanopy.

The marker reads as:

" Oldest known house in town. In 1855 Dr. James A. Stewart built a two-room log cabin for his office, which was the beginning house. Additions were made, including second story and two sandrock chimneys. In 1917 John Merry added front porch with octagon. In remodeling, original hand-hewn logs and pegs were found in old construction."