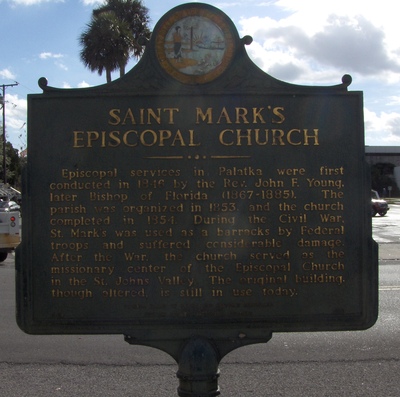 St. Mark's Episcopal Church is an historic Carpenter Gothic Episcopal church located at 200 Main Street in Palatka, Florida in the United States. On May 9, 1973, it was added to the National Register of Historic Places. The text on the marker reads: " Episcopal services in Palatka were first conducted in 1846 by the Rev. John F. Young, later Bishop of Florida (18767-1885). The parish was organized in 1853, and the church completed in 1854. During the Civil War, St. Mark's was used as a barracks by Federal troops and suffered considerable damage. After the War, the church served as the missionary center of the Episcopal Church in the St. Johns Valley. The original building, though altered, is still in use today. "

Placed By Florida Board of Parks and Historical Memorials in cooperation with Putnam County Historical Society.