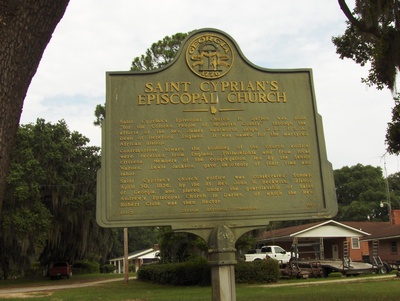 " Saint Cyprian´s Episcopal Church in Darien was built ´for the Colored People of McIntosh County,´ through the efforts of the Rev. James Wentworth Leigh, D.D., F.S.A., Dean of Hereford, England. It was named for the martyred African Bishop.

Contributions toward the building of the church edifice were received from England, Philadelphia and from local citizens. Members of the congregation led by the Senior Warden, Lewis Jackson, gave devotedly of their time and labor.

Saint Cyprian´s church edifice was consecrated Sunday April 30, 1876, by the Rt. Rev. John W. Beckwith, Bishop of Georgia, and placed under the guardianship of Saint Andrew´s Episcopal Church in Darien, of which the Rev. Robert Clute was then Rector."