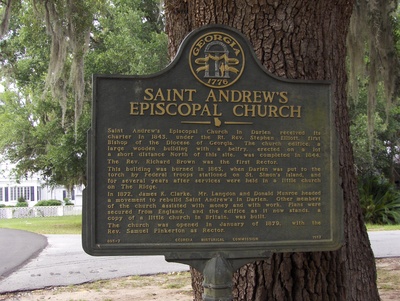 This marker is located on Wayne Street at Vernon Square, Darien.

" Saint Andrew´s Episcopal Church in Darien received its charter in 1843, under the Rt. Rev. Stephen Elliott, first Bishop of the Diocese of Georgia. The church edifice, a large wooden building with a belfry, erected on a lot a short distance North of this site, was completed in 1844. The Rev. Richard Brown was the first Rector.

This building was burned in 1863, when Darien was put to the torch by Federal troops stationed on St. Simon´s Island, and for several years after services were held in a little church on The ridge.

In 1872, James K. Clarke, Mr. Langdon and Donald Munroe headed a movement to rebuild Saint Andrew´s in Darien. Other members of the church assisted with money and with work. Plans were secured from England, and the edifice as it now stands, a copy of a little church in Britain, was built.

The church was opened in January of 1879, with the Rev. Samuel Pinkerton as Rector"