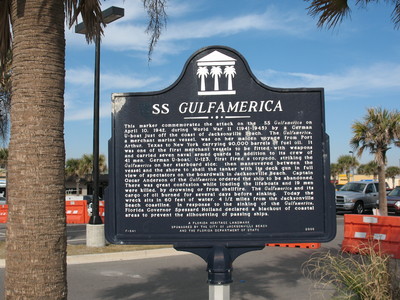 This marker is located on 3rd Street in Jacksonville Beach, Florida.

" This marker commemorates the attack on the USS Gulfamerica on April 10, 1942, during World War II (1941-1945) by a German U-boat just off the coast of Jacksonville Beach. The Gulfamerica, a merchant marine vessel, was on her maiden voyage from Port Arthur, Texas to New York carrying 90,000 barrels of fuel oil. It was one of the first merchant vessels to be fitted with weapons and carried seven naval armed guards in addition to its crew of 41 men. German U-boat, U-123, first fired a torpedo, striking the Gulfamerica on her starboard side; then maneuvered between the vessel and the shore to shell the tanker with its deck gun in full view of spectators on the boardwalk in Jacksonville Beach. Captain Oscar Anderson of the Gulfamerica ordered the ship to be abandoned. There was great confusion while loading the lifeboats and 19 men were killed, by drowning or from shellfire. The Gulfamerica and its cargo of oil burned for several days before sinking. Today the wreck sits in 60 feet of water, 4 ½ miles from the Jacksonville Beach coastline. In response to the sinking of the Gulfamerica, Florida Governor Spessard Holland declared a blackout of coastal areas to prevent the silhouetting of passing ships."

Sponsors: The City of Jacksonville Beach and the Florida Department of State