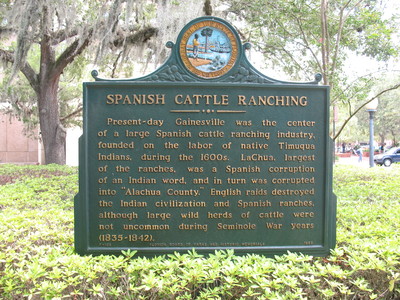 This marker is located on E University Avenue in Gainesville, Fl.

" Present-day Gainesville was the center of a large Spanish cattle ranching industry, founded on the labor of native Timuqua Indians, during the 1600s. LaChua, largest of the ranches, was a Spanish corruption of an Indian word, and in turn was corrupted into "Alachua County." English raids destroyed the Indian civilization and Spanish ranches, although large wild herds of cattle were not uncommon during Seminole War years (1835-1842)."

Florida Board of Parks and Historic Memorials 1969