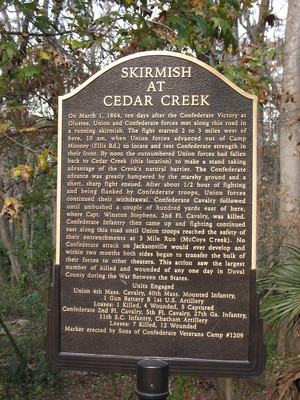 A historic marker to note the location of the battle resulting in the highest number of casualties in Duval County during the Civil War.

" On March 1, 1864, ten days after the Confederate Victory at Olustee, Union and Confederate forces met along this road in a running skirmish. The fight started 2 to 3 miles west of here, 10am, when Union forces advanced out of Camp Mooney (Ellis Rd.) to locate and test Confederate strength in their front. By noon, the outnumbered Union forces had fallen back to Cedar Creek (this location) to make a stand taking advantage of the Creek's natural barrier. The Confederate advance was greatly hampered by the marshy ground and a short, sharp fight ensued. After a half hour of fighting and being flanked by Confederate troops, Union forces continued their withdrawal. Confederate Cavalry followed until ambushed a couple of hundred yards east of here, where Capt. Winston Stephens, 2nd Fl. Calvary,(sic) was killed. Confederate Infantry then came up and fighting continued east along this road until Union troops reached the safety of their entrenchments at 3 Mile Run (McCoys Creek). No Confederate attack on Jacksonville would ever develop and within two months both sides began to transfer the bulk of their forces to other theaters. This action saw the largest number of killed and wounded of any one day in Duval County during the War Between the States.