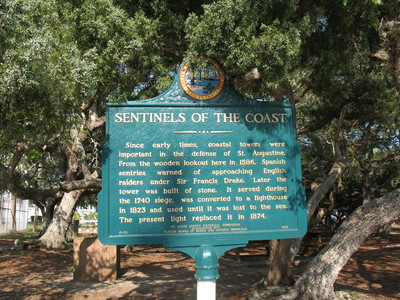 " Since early times, coastal towers were important in the defense of St. Augustine. From the wooden lookout here in 1586, Spanish sentries warned of approaching English raiders under Sir Francis Drake. Later the tower was built of stone. It served during the 1740 siege, was converted to a lighthouse in 1823 and used until it was lost to the sea. The present light replaced it in 1874. "

Placed By St. Johns County Historical Commission in cooperation with Florida Board of Parks and Historic Memorials in 1963.