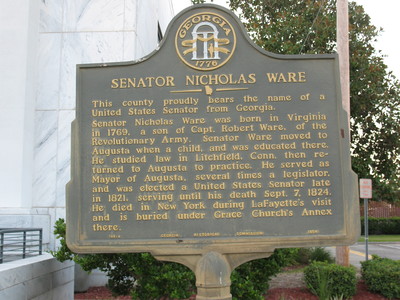 This marker is located outside the Courthouse in Waycross, GA.

" This county proudly bears the name of a United States Senator from Georgia.

Senator Nicholas Ware was born in Virginia in 1769, a son of Capt. Robert Ware, of the Revolutionary Army. Senator Ware moved to Augusta when a child, and was educated there. He studied law in Litchfield, Conn. then returned to Augusta to practice. He served as Mayor of Augusta, several times a legislator, and was elected a United States Senator late in 1821, serving until his death Sept. 7, 1824. He died in New York during LaFayette`s visit and is buried under Grace Church`s Annex there."