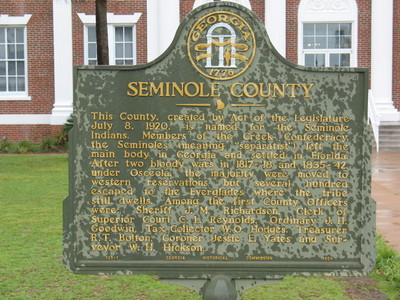 This marker is located outside the Courthouse in Donalsonville, in Seminole County, Georgia.

" This county, created by Act of the Legislature July 8, 1920, is named for the Seminole Indians. Members of the Creek Confederacy, the Seminoles (meaning `separatist`) left the main body in Georgia and settled in Florida. After two bloody wars in 1817-`18 and 1835-`42, under Osceola, the majority were moved to western reservations but several hundred escaped to the Everglades where the tribe still dwells. Among the first County Officers were: Sheriff J.M. Richardson, Clerk of Superior Court C.L. Reynolds, Ordinary J.H. Goodwin, Tax Collector W.O. Hodges, Treasurer R.T. Bolton, Coroner Jessie E. Yates and Surveyor W.H. Hickson. "