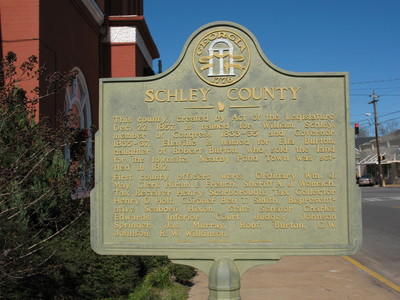 This marker is part of the Georgia: Georgia Historical Society/Commission series. It is located outside the courthouse in Ellaville in Schley County, Georgia.

" This county, created by Act of the Legislature Dec. 22, 1857, is named for William Schley, member of Congress 1833-35 and Governor 1835-37. Ellaville is named for Ella Burton, daughter of Robert Burton, who sold the land for the town site. Nearby Pond Town was settled in 1812.