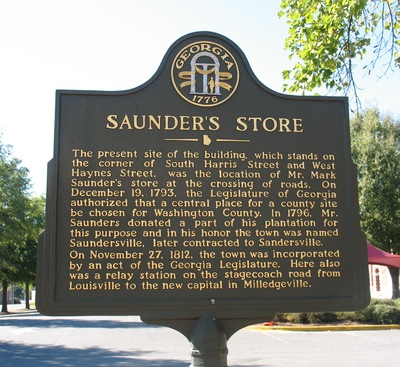 This marker is located beside the Police "Box", Courthouse Square, Sandersville, GA.

" The present site of the Sandersville Drug Company was the location of Mr. M. Saunder´s store at the crossing of roads. On Dec. 19, 1793, the Legislature of Georgia authorized that a central place for a county site be chosen for Washington County. In 1796, Mr. Saunders donated a part of his plantation for this purpose and in his honor the town was called Saundersville, later contracted to Sandersville. On November 27, 1812, the town was incorporated by an Act of the Georgia Legislature. Here also was a relay station on the stagecoach road from Louisville to the new Capitol in Milledgeville."