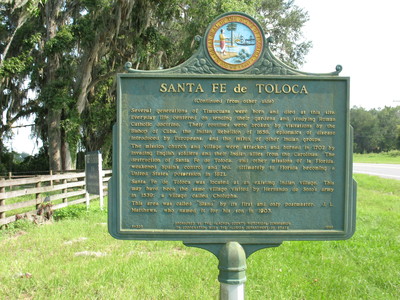 The text on the reverse reads as : (Reverse)

" Several generations of Timucuans were born and died at this site. Everyday life centered on tending their gardens and studying Roman Catholic doctrine. Their routines were broken by visitations by the Bishop of Cuba, the Indian Rebellion of 1656, epidemics of disease introduced by Europeans, and the influx of other Indian groups. The mission church and village were attacked and burned in 1702 by invading English soldiers and their Indian allies from the Carolinas. The destruction of Santa Fe de Toloca, and the other missions of la Florida, weakened Spain's control and led, ultimately to Florida becoming a United States' possession in 1821. Santa Fe de Toloca was located at an existing Indian village. This may have been the same village visited by Hernando de Soto's army in 1539; a village called Cholupaha. This area was called "Bland" by its first and only postmaster, J.L. Matthews, who named it for his son in 1903."

Placed by Alachua County Historical Commission in Cooperation with the Florida Department of State.