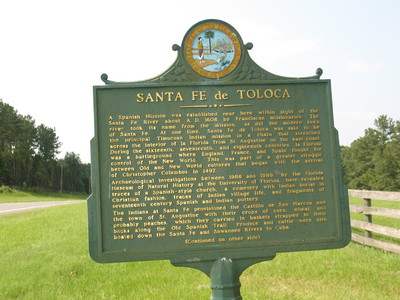 " A Spanish Mission was established near here within sight of the Santa Fe River about A.D. 1606 by Franciscan missionaries. The river took its name from the mission, as did the modern town of Santa Fe. At one time, Santa Fe de Toloca was said to be the principal Timucuan Indian mission in a chain that stretched across the interior of la Florida from St. Augustine on the east coast. during the sixteenth, seventeenth, and eighteenth centuries, la Florida was a battleground where England, France, and Spain fought for control of the New World. This was part of a greater struggle between Old and New World cultures that began with the arrival of Christopher Columbus in 1492. Archaeological investigations between 1986 and 1989, by the Florida Museum of Natural History at the University of Florida, have revealed traces of a Spanish-style church, a cemetery with Indian burial in Christian fashion, traces of Indian village life, and fragments of seventeenth century Spanish and Indian pottery. The Indians at Santa Fe provisioned the Castillo de San Marcos and the town of St. Augustine with their crops of corn, wheat, and probably peaches, which they carried in baskets strapped to their backs along the Old Spanish Trail. Produce and cattle were also boated down the Santa Fe and Suwannee Rivers to Cuba."