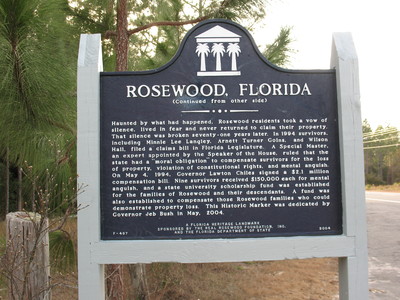 A historical marker about the Rosewood Massacre is located on State Road 24 in Rosewood, Florida.

SIDE 2: "Haunted by what had happened, Rosewood residents took a vow of silence, lived in fear and never returned to claim their property. That silence was broken seventy-one years later. In 1994 survivors, including Minnie Lee Langley, Arnett Turner Goins, and Wilson Hall, filed a claims bill in the Florida Legislature. A Special Master, an expert appointed by the Speaker of the House, ruled that the state had a "moral obligation" to compensate survivors for the loss of property, violation of constitutional rights, and mental anguish. On May 4, 1994, Governor Lawton Chiles signed a $2.1 million compensation bill. Nine survivors received $150,000 each for mental anguish, and a state university scholarship fund was established for the families of Rosewood and their descendants. A fund was also established to compensate those Rosewood families who could demonstrate property loss. This Historic Marker was dedicated by Governor Jeb Bush in May, 2004."

Sponsored or placed by: The Real Rosewood Foundation, Inc. and the Florida Department of State