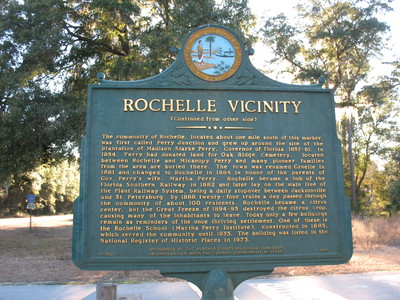 " The community of Rochelle, located about one mile south of this marker, was first called Perry Junction and grew up around the site of the plantation of Madison Starke Perry, Governor of Florida 1857-61. In 1854, Perry had donated land for Oak Ridge Cemetery, located between Rochelle and Micanopy. Perry and many pioneer families from the area are buried there. The town was renamed Gruelle in 1881 and changed to Rochelle in 1884 in honor of the parents of Gov. Perry's wife, Martha Perry. Rochelle became a hub of the Florida Southern Railway in 1882 and later lay on the main line of the Plant Railway System, being a daily stopover between Jacksonville and St. Petersburg. By 1888 twenty-four trains a day passed through the community of about 100 residents. Rochelle became a citrus center, but the Great Freeze of 1894-95 destroyed the citrus crop, causing many of the inhabitants to leave. Today only a few buildings remain as reminders of the once thriving settlement. One of these is the Rochelle School (Martha Perry Institute), constructed in 1885, which served the community until 1935. The building was listed in the National Register of Historic Places in 1973."