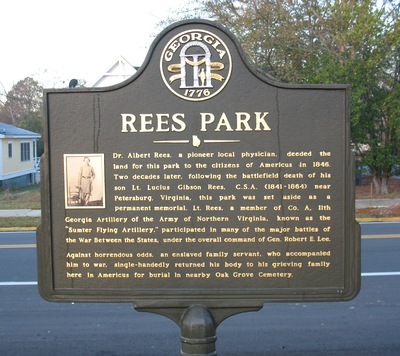 This marker is located on Elm Ave at entrance to Rees Park, Americus, Sumter County, GA.

" Dr. Albert Rees, a pioneer local physician, deeded the land for this park to the citizens of Americus in 1846. Two decades later, following the battlefield death of his son Lt. Lucius Gibson Rees, C.S.A. (1841-1864) near Petersburg, Virginia, this park was set aside as a permanent memorial. Lt. Rees, a member of Co. A, 11th Georgia Artillery of the Army of Northern Virginia, known as the "Sumter Flying Artillery," participated in many of the major battles of the War Between the States, under the overall command of Gen. Robert Â E. Lee. Against horrendous odds, an enslaved family servant, who accompanied him to war, single-handedly returned his body to his grieving family here in Americus for burial in nearby Oak Grove Cemetery. "