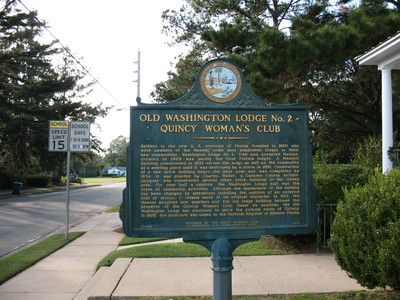 The Quincy Woman's Club, also known as the Old Washington Lodge No. 2, was added to the U.S. National Register of Historic Places on March 10, 1975. Originally it was built as a Masonic lodge and in 1922 taken over by the Women's Club.

An historical marker in front of the Quincy Woman's Club reads:

"Settlers in the new U.S. territory of Florida (created in 1821) who were members of the Masonic order soon established lodges in their new communities. Washington Lodge No. 2, Free and Accepted Masons, created in 1828 was among the first Florida lodges. A Masonic building constructed in 1832 served the lodge as well as the community as a meeting place until it was destroyed by a storm in 1851. Construction of a new brick building began the next year and was completed by 1854. It was erected by Charles Waller, a Gadsden County builder-designer who constructed several other brick buildings in the Quincy area. For over half a century, the Washington Lodge hall was the scene of community activities. Although the appearance of the building has been changed by alterations including the addition of an exterior coat of stucco, it retains much of its original character. In 1922, the Masons acquired new quarters and the old lodge building became the property of the Quincy Woman's Club. Under its auspices, the Old Washington Lodge has continued to serve the cultural needs of Quincy. In 1975, the structure was added to the National Register of Historic Places."