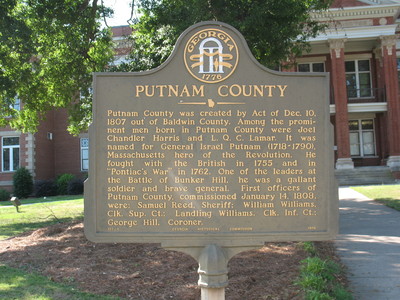 This marker is located outside the Courthouse in Eatonton, Putnam County, Georgia.

" Putnam County was created by Act of Dec. 10, 1807 out of Baldwin County. Among the prominent men born in Putnam County were Joel Chandler Harris and L.Q.C. Lamar. It was named for General Israel Putnam (1718-1790), Massachusetts hero of the Revolution. He fought with the British in 1755 and in ´Pontiac´s War´ in 1762. One of the leaders at the Battle of Bunker Hill, he was a gallant soldier and brave general. First officers of Putnam County, commissioned January 14, 1808, were: Samuel Reed, Sheriff; William Williams, Clk. Sup. Ct.; Landing Williams, Clk. Inf. Ct.; George Hill, Coroner."