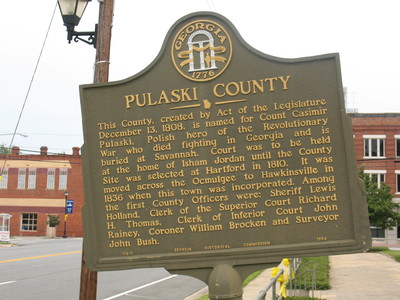 This marker stands outside the courthouse in Hawkinsville in Pulaski County, Georgia.

" This County, created by Act of the Legislature December 13, 1808, is named for Count Casimir Pulaski, Polish hero of the Revolutionary War who died fighting in Georgia and is buried in Savannah. Court was to be held at the home of Isham Jordan until the County Site was selected at Hartford in 1810. It was moved across the Ocmulgee to Hawkinsville in 1836 when this town was incorporated. Among the first County Officers were: Sheriff Lewis Holland, Clerk of the Superior Court Richard H. Thomas, Clerk of Inferior Court John Rainey, Coroner William Brocken and Surveyor John Bush. "