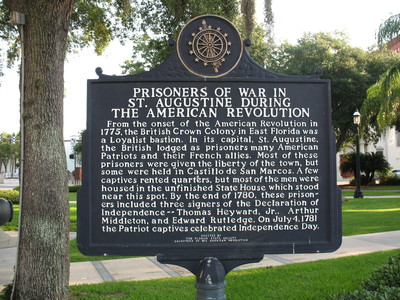 The text on the marker reads as : Prisoners of War in St Augustine during the American Revolution

" From the onset of the American Revolution in 1775, the British Crown Colony in East Florida was a Loyalist bastion. In its capital, St. Augustine, the British lodged as prisoners many American Patriots and their French allies. Most of these prisoners were given the liberty of the town, but some were held in Castillo de San Marcos. A few captives rented quarters, but most of the men were housed in the unfinished State House which stood near this spot. By the end of 1780, these prisoners included three signers of the Declaration of Independence--Thomas Heyward, Jr., Arthur Middleton, and Edward Rutledge. On July 4, 1781, the Patriot captives celebrated Independence Day."

Sponsored or placed by: THE FLORIDA STATE SOCIETY DAUGHTERS OF THE AMERICAN REVOLUTION