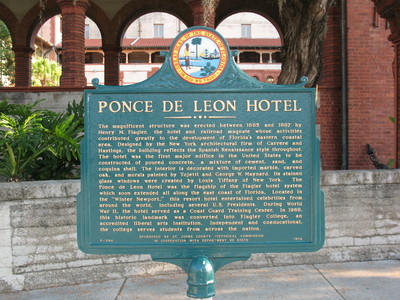 This large concrete building was named for Ponce de Leon. The historical marker is in front of what is now Flagler College. This building was originally constructed byHenry Flagler in the 1880's as part of his hotel empire. This hotel hosted entertainers and US Presidents.. Later it became Coast Guard Training Center and now is the private Flagler College.

" The magnificent structure was erected between 1885 and 1887 by Henry M. Flagler, the hotel and railroad magnate whose activities contributed greatly to the development of Florida's eastern coastal area. Designed by the New York architectural firm of Carrere and Hastings, the building reflects the Spanish Renaissance style throughout. The hotel was the first major edifice in the United States to be constructed of poured concrete, a mixture of cement, sand, and coquina shell. The interior is decorated with imported marble, carved oak, and murals painted by Tojetti and George W. Maynard. Its stained glass windows were created by Louis Tiffany of New York. The Ponce de Leon Hotel was the flagship of the Flagler hotel system which soon extended all along the east coast of Florida. Located in the "Winter Newport," this resort hotel entertained celebrities from around the world, including several U.S. Presidents. During World War II, the hotel served as a Coast Guard Training Center. In 1968, this historic landmark was converted into Flagler College, an accredited liberal arts institution. Independent and coeducational, the college serves students from across the nation."