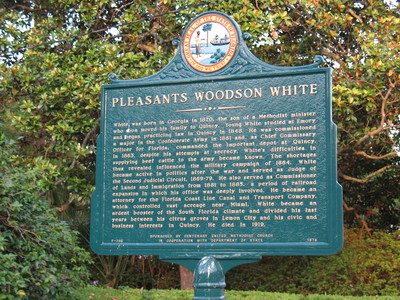 This is a double sided marker located on W King St at Madison St in Gadsden County in Florida.

The text reads as ( side 2) Pleasants Woodson White

" White was born in Georgia in 1820, the son of a Methodist minister who soon moved his family to Quincy. Young White studied at Emory and began practicing law in Quincy in 1848. He was commissioned a major in the Confederate Army in 1861 and, as Chief Commissary Officer for Florida, commanded the important depot at Quincy. In 1863, despite his attempts at secrecy, White´s difficulties in supplying beef cattle to the army became known. The shortages thus revealed influenced the military campaign of 1864. White became active in politics after the war and served as Judge of the Second Judicial Circuit, 1869-79. He also served as Commissioner of Lands and Immigration from 1881 to 1885, a period of railroad expansion in which his office was deeply involved. He became an attorney for the Florida Coast Line Canal and transport Company, which controlled vast acreage near Miami. White became an ardent booster of the South Florida climate and divided his last years between his citrus groves in Lemon city and his civic and business interests in Quincy. He died in 1919."

" This house was constructed during the early 1840´s for Joseph Leonard Smallwood. At that time, it was a one and one-half story structure. In 1849, Pleasants Woodson White married Smallwood´s niece, Emily, and purchased the property. He had the house enlarged in 1856; it was remodeled in the Classical Revival style at the same time. The house is an excellent example of the style. Its matching porticos supported by Doric columns give it a dignified balance. The Whites were an active Quincy family. P.W. White served the Confederacy as Chief Commissary Officer for Florida and was politically active after the Civil War. Emily White organized and served as president of the Ladies Aid Society during the war, nursing and providing necessities to wounded soldiers. She was also involved in Methodist Church activities. The house, which was the White family home until 1921, has since served as the parsonage of Centenary Methodist Church. The White House was placed on the National Register of Historic Places on February 16, 1973."