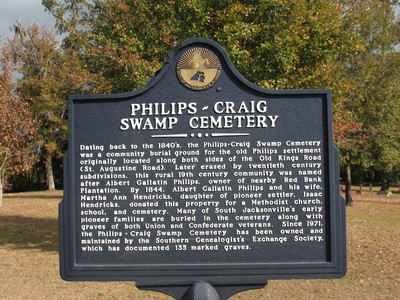 This marker is on St. Augustine Road near Lorimier Road, Jacksonville, FL

" Dating back to the 1840's, the Philips-Craig Swamp Cemetery was a community burial ground for the old Philips settlement originally located along both sides of Old Kings Road (St. Augustine Road). Later erased by twentieth century subdivisions, this rural 19th century community was named after Albert Gallatin Philips, owner of nearby Red Bank Plantation. By 1844 Albert Gallatin Philips and his wife, Martha Anne Hendricks, daughter of pioneer settler, Isaac Hendricks, donated this property for a Methodist Church, school, and cemetery. Many of South Jacksonville's early pioneer families are buried in the cemetery along with graves of both Union and Confederate veterans. Since 1971 the Philips-Craig Swamp Cemetery has been owned and maintained by the Southern Genealogist's Exchange Society, which has documented 135 marked graves. "

Erected by City of Jacksonville Florida.