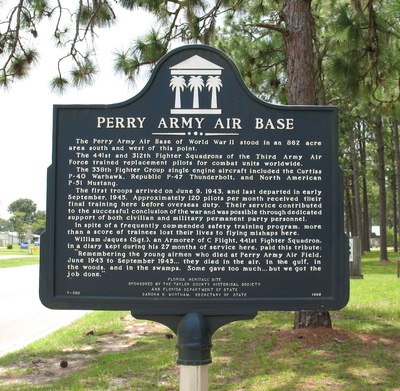 Perry Army Air Base Marker, Perry FL This marker is located along S Byron Butler Pkwy in Perry Florida. It is very near the entrance to the Forest Capital State park. the text on the marker reads as : " The Perry Army air base of World War II stood in an 862 acre area south and west of this point. The 441st and 312th Fighter Squadrons of the Third Army Air Force trained replacement pilots for combat units worldwide. The 338 fighter group single engine aircraft included the Curtis P-40 Warhawk, Republic P-47 Thunderbolt, and North American P-51 Mustang. The first troops arrived on June 9, 1943, and last departed in early September, 1945. Approximately 120 pilots per month received their final training here before overseas duty. Their service contributed to the successful conclusion of the war and was possible through dedicated support both civilian and military permanent party personnel. William Jaques (Sgt.), and armorer of C flight, 441st fighter squadron, in a diary kept during his 27 months of service here, paid this tribute: “Remembering the young air man who died at Perry Army Air Field. June 1943 to September 1945 … They died in the air, in the gulf, in the woods, and in the swamps. Some gave too much … but we got the job done.”