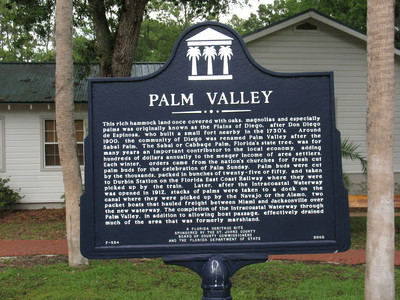 This marker is located in St Johns County.

" This rich hammock land once covered with oaks, magnolias and especially palms was originally known as the Plains of Diego, after Don Diego de Espinosa, who built a small fort nearby in the 1730s. Around 1900, the community of Diego was renamed Palm Valley after the Sabal Palm. The Sabal or Cabbage Palm, Florida's state tree, was for many years an important contributor to the local economy, adding hundreds of dollars annually to the meager income of area settlers. Each winter, orders came from the nations churches for fresh cut palm buds for the celebration of Palm Sunday. Palm buds were cut by the thousands, packed in bunches of twenty-five or fifty, and taken to Durbin Station on the Florida East Coast Railway where they were picked up by the train. Later, after the Intracoastal Waterway was opened in 1912, stacks of palms were taken to a dock on the canal where they were picked up by the Navajo or the Alamo, two packet boats that hauled freight between Miami and Jacksonville over the new waterway. The completion of the Intracoastal Waterway through Palm Valley, in addition to allowing boat passage, effectively drained much of the area that was formerly marshland."

Sponsors: the St. Johns County Board of County Commissioners and The Florida Department of State.