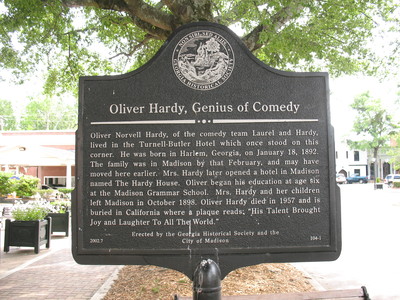 This marker of Oliver Hardy, Genius of Comedy, is located on Corner of Hancock and E. Jefferson Streets, Madison, Georgia.

Oliver Norvell Hardy, of the comedy team Laurel and Hardy, lived in the Turnell-Butler Hotel which once stood on this corner. He was born in Harlem, Georgia, on January 18, 1892. The family was in Madison by that February, and may have moved here earlier. Mrs. Hardy later opened a hotel in Madison named The Hardy House. Oliver began his education at age six at the Madison Grammar School. Mrs. Hardy and her children left Madison in October 1898. Oliver Hardy died in 1957 and is buried in California where a plaque reads “His Talent Brought Joy and Laughter To All The World.”