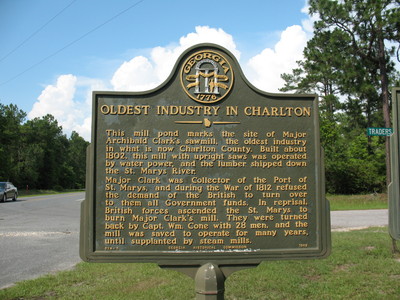 " This mill pond marks the site of Major Archibald Clark’s sawmill, the oldest industry in what is now Charlton County. Built about 1802, this mill with upright saws was operated by water power, and the lumber shipped down the St. Marys River.

Major Clark was Collector of the Port of St. Marys, and during the War of 1812 refused the demand of the British to turn over to them all Government funds. In reprisal, British forces ascended the St. Marys to burn Major Clark’s mill. They were turned back by Capt. Wm. Cone with 28 men, and the mill was saved to operate for many years, until supplanted by steam mills."