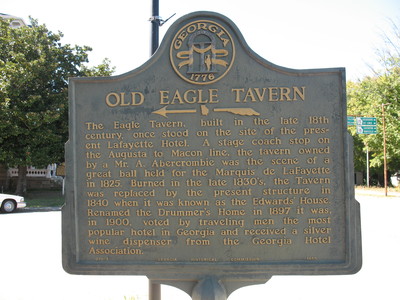 This marker is located where the LaFayette Hotel now stands on Main Street, Sparta Near the Courthouse.

" The Eagle Tavern, built in the late 18th century, once stood on the site of the present Lafayette Hotel. A state coach stop on the Augusta to Macon line, the tavern owned by a Mr. A. Abercrombie was the scene of a great ball held for the Marquis de LaFayette in 1825. Burned in the late 1830´s, the Tavern was replaced by the present structure in 1840 when it was known as the Edwards´ House. Renamed the Drummer´s Home in 1897 it was, in 1900, voted by traveling men the most popular hotel in Georgia and received a silver wine dispenser from the Georgia Hotel ."

It was sponsored by the GEORGIA HISTORICAL COMMISSION.