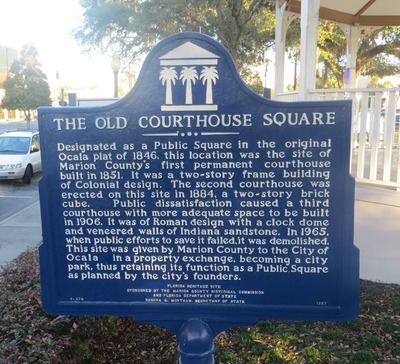 This marker is located at the "Old Courthouse Square in Ocala Florida.

" Designated as a Public Square in the original Ocala plat of 1846, this location was the site of Marion County's first permanent courthouse built in 1851. it was a two-story frame building of Colonial design. The second courthouse was erected on this site in 1884, a two-story brick cube. Public dissatisfaction caused a third courthouse with more adequate space to be built in 1906. It was of Roman design with a clock dome and veneered walls of Indiana sandstone. In 1965, when public efforts to save it failed, it was demolished. This site was given by Marion County to the City of Ocala in a property exchange, becoming a city park, thus retaining its function as a Public Square as planned by the city's founders."

Sponsored or placed by: Marion County Historical Commission and the Florida Department of State.