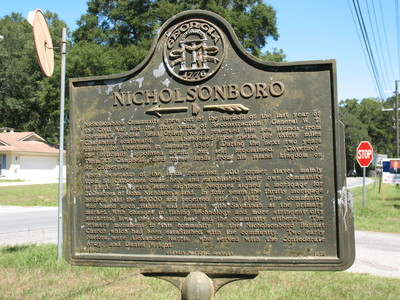 " Nicholsonboro Community grew out of the turmoil of the last year of the Civil War and the first years of Reconstruction. General W. T. Sherman’s Special Field Order No. 15 reserved the sea islands from Charleston southward, plus abandoned rice fields for thirty miles inland, for freedmen in January 1865. During the next two years the officially appointed agent, but self proclaimed, “Governor” Tunis G. Campbell ruled these lands from his island kingdom on St. Catherine. When ownership of the lands reverted, 200 former slaves mainly from St. Catherines came here and established their own community in 1868. Ten years later eighteen Negroes signed a mortgage for 200 acres of John Nicholson’s land. In four years the thrifty mortgage holders paid the $5,000.00 and received the title in 1882. The community was based upon fishing and farming with Savannah as the primary market. With changes in fishing technology and more stringent city marketing laws, the economic base and the community withered. The primary monument to this community is the Nicholson Baptist Church which had been established with the community. Two early pastors were Alexander Harris, who served with the Confederate Army, and Daniel Wright."