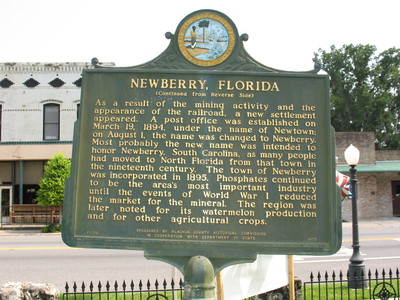 This is located on US Highway 26, in Newberry, Florida.

The marker reads as : ( side 2) continued from reverse side

" As a result of the mining activity and the appearance of the railroad, a new settlement appeared. A post office was established on March 19, 1894, under the name of Newtown; on August 1, the name was changed to Newberry. Most probably the new name was intended to honor Newberry, South Carolina, as many people had moved to North Florida from that town in the nineteenth century. The town of Newberry was incorporated in 1895. Phosphates continued to be the area's most important industry until the events of World War I reduced the market for the mineral. The region was later noted for its watermelon production and for other agricultural crops. "

Sponsored by the Alachua County Historical Commission, in co-operation with the Department of State.