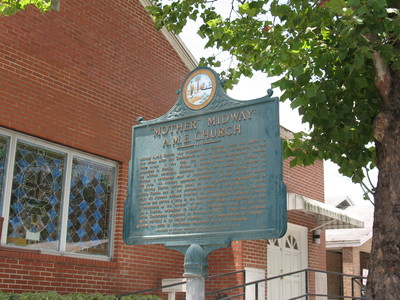 This historical marker about the "Mother" Midway A.M.E. Church is located at 1462 Van Buren Street in Springfield area of Jacksonville, Florida.

" Midway A.M.E. Church was organized on Sunday, June 10, 1865, a few weeks after the Confederate Army in Florida surrendered to the Union Army. It was thus the first black independent church organized in Florida. William G. Steward was sent to Florida by the African Methodist Episcopal Church, and founded a church at Midway, a settlement east of Jacksonville, on his second day in the state. Mr. Steward appointed Brother G. B. Hill as the pastor of Midway Church before going on to organize congregations in middle Florida and in the panhandle section of the state. In later years Mr. Steward became involved in politics in Leon and Gadsden Counties and served a term in the Florida Legislature. Midway Church is recognized as the "mother" of both the Florida Conference of the A.M.E. Church, organized in 1867 in Tallahassee, and of the East Florida Conference organized in Palatka in 1877. While the original church building is no longer standing, the congregation of "Mother" Midway has been in continuous existence since its founding."

Sponsored by: African Methodist Episcopal Church of Florida in Cooperation with Department of State.