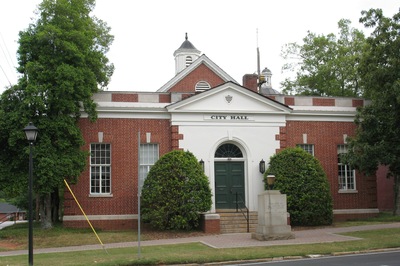 Madison is a city in Morgan County, Georgia, United States. It is part of the Atlanta-Athens-Clarke-Sandy Springs Combined Statistical Area. The population was 3,636 at the 2000 census. The city is the county seat of Morgan County and the site of the Morgan County Courthouse. The Historic District of Madison is one of the largest in the state. Madison was founded in 1807 as seat of the newly formed Morgan County, and was named for President James Madison.

This two-story brick building served as Madison's City Hall and Fire Station until the new City Hall was built in the mid-1930s. The building was purchased in 1989 by the Madison-Morgan County Chamber of Commerce Foundation, Inc. and was fully restored for use. The original fire bell has been returned to the building's cupola.