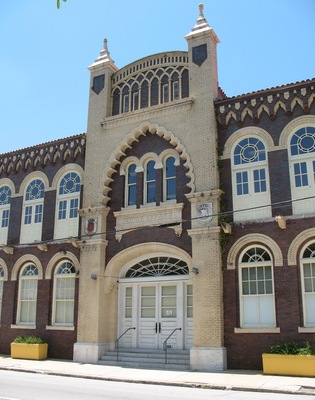 El Centro Español de Tampa is a historic building in the Ybor City neighborhood of Tampa, in the U.S. state of Florida. Built as an ethnic and cultural clubhouse in 1912, the red brick structure situated at 1526–1536 East 7th Avenue is today part of a shopping and entertainment complex. It remains one of the few surviving structures specific to Spanish immigration to the United States during the late 19th and early 20th centuries,

The building was included by the National Register of Historic Places as one of the Contributing Properties within the Ybor City Historic District. The building remains an important component of the district, which on December 4, 1990, gained more distinct recognition as a National Historic Landmark District. It is now home to Jason Fernandez's restaurant.

The Centro Español building was designed by Francis J. Kennard, a noted architect who was responsible, either solely or in part, for many Tampa Bay area structures now considered to be of historic importance. The structure features masonry construction of red brick with white stone accents.