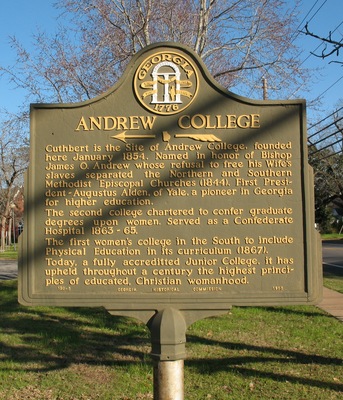 This historic marker is located on US 82 W in Cuthbert at the campus opposite Andrew Street. It was installed by the Georgia Historical Commission.

" Cuthbert is the site of Andrew College, founded here January 1854, named in honor of Bishop James O. Andrew whose refusal to free his Wife´s slaves separated the Northern and Southern Methodist Episcopal Churches (1844). First President - Augustus Alden, of Yale, a pioneer in Georgia for higher education.

The second college chartered to confer graduate degrees upon women. Served as a Confederate Hospital 1863-65.

Today, a fully accredited Junior College, it has upheld throughout a century the highest principles of education, Christian womanhood."