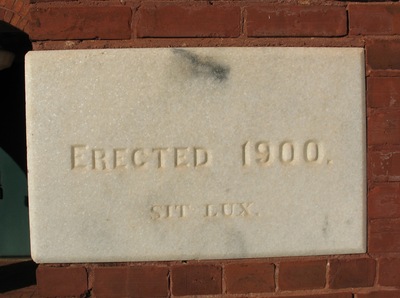 This is the Corner Stone of the Andrew College Warren Bush Hall. This was errected in 1900.

Andrew College, founded in 1854, is located in Cuthbert in southwest Georgia. Affiliated today with the United Methodist Church, Andrew College was named for Bishop James Osgood Andrew, Originally named Andrew Female College, Andrew operated as a women’s four-year college for 63 years. In 1917 Andrew became a junior college and in 1956 the institution became co-educational.

Warren Bush Hall, named for a professor, was built in 1900 to accommodate more classrooms. Cuthbert Hall, built in 1912, connected the two buildings, Old Main and Warren Bush Hall. Warren Bush hosts the art classroom and the art gallery. Student artwork is displayed in the gallery on several occasions through out the semester for the entire campus to see.