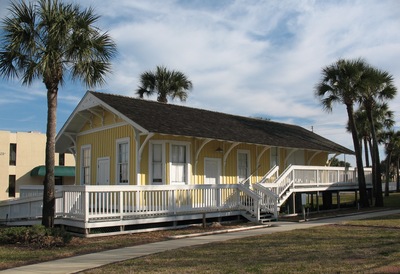 This c1900 building stood in Mayport as the terminus point for the Florida East Coast Railway spur line to Mayport. Mr. Henry Flagler bought the Jacksonville and Atlantic Railway, expanded it to standard gauge and extended it to Mayport. The spur line was in operation from 1900 to 1932.

After the rail line ceased operation to Mayport this building was used as part of a home and a bar and restaurant. It was moved from the port area in Mayport to the end of Pearl Street, and then to Pablo Historical Park in 1981