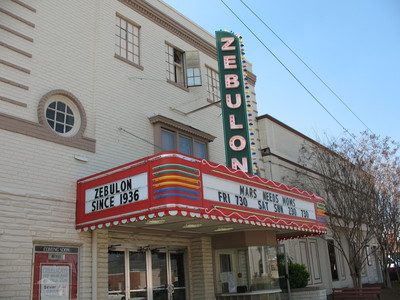 The Zebulon Theatre was opened on April 15, 1936 as a 650-seat theater by Ms. Ethel Blanton who named it after her husband Zebulon Blanton. In 1950 the Blanton Family sold the theater to The Dunn Family Theatre’s Inc. and was operated under that family business until 1973 when Mr. Larry Bearden purchased it and ran it successfully until he retired in 2000.

The Community Foundation of South West Georgia purchased the theater on December 15, 2000 and it is now operated by the Regional Community Center, a non profit organization. The Zebulon Theatre is still a single screen Adams-style building with a seating capacity of 350 — including the balcony. The Zebulon Theatre now plays sub-run movies and is a family friendly theater that only plays movies with a rating from G to PG-13. The Zebulon Theatre is a jewel in Grady County that the residents are proud to still have, when so many of the old movie theaters have been torn down in the name of progress. This shows the Zebulon Theater Marquee.