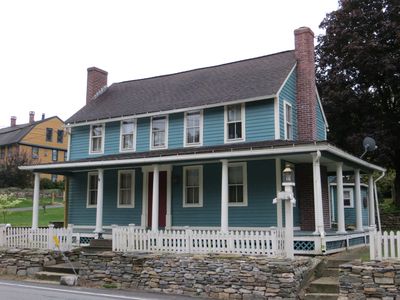 The Poquetanuck Village Historic District is a well-preserved, cohesive, and densely built concentration of primarily 18th century and early 19th century village residences which are representative of the development of a small scale New England coastal trading and manufacturing center and a vernacular interpretation of popular building techniques and architectural styles. The historic resources of the Poquetanuck Village Historic District retain considerable integrity and are important for their survival in scale, massing, and overall character with little 20th-century intrusion. As a group of buildings, these resources are distinguished as having the identity of location, feeling, and association of a center of colonial and early 19th-century daily life. Buildings of the Poquetanuck Village Historic District demonstrate the continuation of early building traditions as well as a range of conservative architectural taste for the 200 year period of significance, 1720-1920, during which the village retained an important place in the local and regional economies.