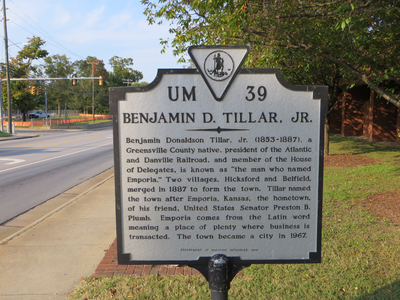 "Benjamin Donaldson Tillar, Jr. (1853-1887), a Greensville County native, president of the Atlantic and Danville Railroad, and member of the House of Delegates, is known as "the man who named Emporia." Two villages, Hicksford and Belfield, merged in 1887 to form the town. Tillar named the town after Emporia, Kansas, the hometown, of his friend, United States Senator Preston B. Plumb. Emporia comes from the Latin word meaning a place of plenty where business is transacted. The town became a city in 1967." Department of Historic Resources, 1992