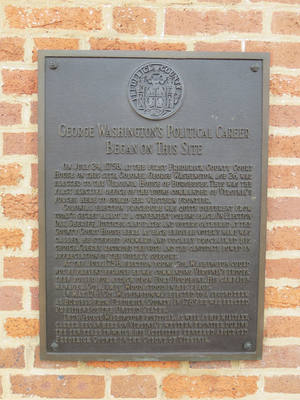 George Washington's Political Career Began on this site. On July 24, 1758, at the first Frederick County Court House on this site, Colonel George Washington, age 26, was elected to the Virginia House of Burgesses. This was the first elective office of the young commander of Virginia's forces here to guard her western frontier.

Colonial election procedure was quite different from today's secret ballot at a convenient polling place. On election day, sheriff, justices, candidates and voters gathered at the county court house here. As each eligible voter's name was called, he stepped forward and vocally proclaimed his choice. Clerks recorded the vote and the candidate bowed in appreciation of the voter's support.

At the July, 1758, election young Col. Washington could not be present because he was commanding Virginia's troops, then poised for attack upon Fort Duquesne. His campaign manager, Col. James Wood, stood in his place.

In May 1761 Col. Washington was elected to a second term as burgess from Frederick county. In 1789 he was elected president of the United States.

Thus, George Washington's political as well as his military career began here on Virginia's western frontier during the ten years in which his activities centered about on Frederick County in the Colony of Virginia.