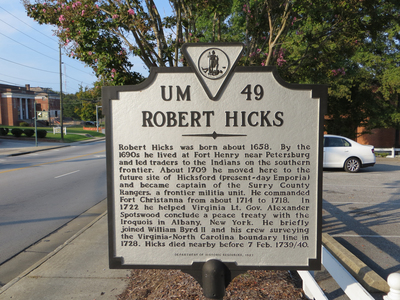 Robert Hicks was born about 1658. By the 1690 he lived at Fort Henry near Petersburg and led traders to the Indians on the southern frontier. About 1709 he moved here to the future site of Hicksford (present-day Emporia) and became captain of the Surry County Rangers, a frontier militia unit. He commanded Fort Christanna from about 1714 to 1718. In 1722 he helped Virginia Lt. Gov. Alexander Spotswood conclude a peace treaty with the Iroquois in Albany, New York. He briefly joined William Byrd II and his crew surveying the Virginia-North Carolina boundary line in 1729. Hicks died nearby before 7 Feb 1739/40.