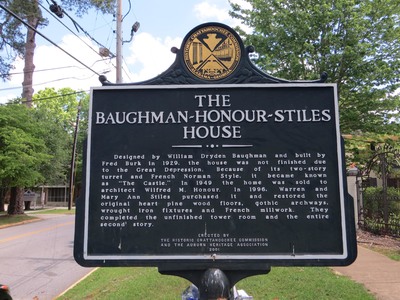 The marker reads: “THE BAUGHMAN-HONOUR-STILES HOUSE Designed by William Dryden Baughman and built by Fred Burk in 1929, the house was not finished due to the Great Depression. Because of its two-story turret and French Norman Style, it became known as “The Castle.” In 1949 the home was sold to architect Wilfred M. Honour. In 1996, Warren and Mary Ann Stiles purchased it and restored the original heart pine wood floors, gothic archways, wrought iron fixtures and French millwork. They completed the unfinished tower room and the entire second story. ERECTED BY THE HISTORIC CHATTAHOOCHEE COMMISSION AND THE AUBURN HERITAGE ASSOCIATION Historic Chattahoochee Commission Alabama- Georgia seal at top of sign.